CAMP BAUTISTA, SULU, Republic of the Philippines -- An international team gathered on the island of Jolo July 20-25 for a week-long effort to bring life-changing medical treatment to children living with cleft palates and cleft lips in an event called ‘Operation Sumbing’. 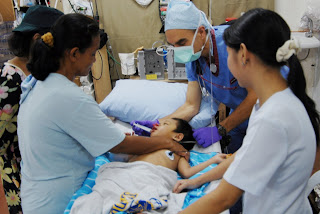 Organized by the Armed Forces of the Philippines, Knightsbridge International and the U.S. Joint Special Operations Task Force – Philippines, ‘Operation Sumbing’ (‘Sumbing’ is the Tausug word for ‘cleft palate’) brought together doctors from Operation Smile Philippines and Johns Hopkins University to perform free corrective surgeries for 37 children on the island.

The surgeries are being conducted at the AFP Trauma Center on Camp Bautista with post-operative care being provided by AFP and U.S. medical personnel from Bautista as well as AFP nurses from nearby Camp Asturias.

At a brief welcome ceremony for the participants Tuesday, Brig. Gen. Eugenio Clemen, 3rd Marine Brigade Commander, thanked the participants, saying, “Your generous concern for the poor and indigent is clearly evident in what you are selflessly doing today -- restoring the faith, hope and confidence of our less fortunate citizens.”

Although research has yet to prove definitively what causes the birth defect of cleft lips and palates, the end result is a failure of a fetus’ head and face to finish developing in the womb, leaving a gap in the upper lip and roof of the mouth, according to Dr. Jaime Flores, one of the Johns Hopkins surgeons. It’s a very visible deformity that can affect a child’s health, self-esteem and overall well-being. 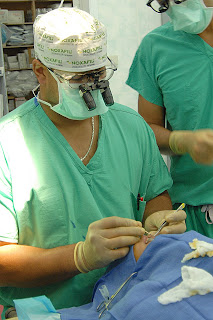 For some, the difficulties associated with cleft lip or palate can be minor. “[My daughter] is an honor student in her school, but her speech is somewhat affected,” said Jolo native Majieda Nurmiddin, whose 13-year-old daughter Nurhinda was treated at Operation Sumbing.

For others with more serious forms of the condition, daily life can be a struggle. “They can have trouble eating or speaking,” said Dr. Jonathan Cohen, one of the surgeons visiting from Johns Hopkins University in Maryland. “They’re often marginalized or shunned because of their deformities.”

Considering the impact on the child’s future, the surgical process itself is fairly simple. All in all, it’s less than 48 hours from the time a patient arrives at the clinic before he or she is released to go home with a brand new smile.

“When they arrive, we screen the patients, looking for colds or upper respiratory infections that may affect the anesthetic,” said Lt. Jayson Bulanadi of the Philippine Military Nurse Corps.

“The patient and one guardian stay the night to allow for recovery and are discharged the next day,” he added.

The operation itself can be as quick as an hour and a half, during which the surgeons piece together the “puzzle” of the patient’s lip or palate. That’s how long it took Dr. Flores and his team to repair the cleft lip of Shermina Singkay, the 3-year-old daughter of Jolo native Muhila Singkay. 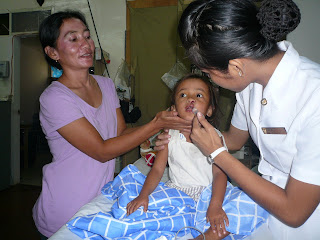 “Now her future will be very bright,” Singkay said.

“She probably won’t even remember when she looked like this,” Dr. Flores said referring to Shermina’s pre-operation photos.

For the doctors who donated their time to perform these surgeries, it has always been about giving kids a chance at a better life.

“This was neither a military event nor a political event, but a show of how we can come together to help,” Dr. Cohen said.

At the request of the Philippine Government, JSOTF-P works together with the Armed Forces of the Philippines to fight terrorism and deliver humanitarian assistance to the people of Mindanao.

U.S. forces are temporarily deployed to the Philippines in a strictly non-combat role to advise and assist the AFP, share information, and to conduct joint civil military operations.

JSOTF-P is made up of Special Operations forces and support personnel from all four branches of the U.S. military. For more on the JSOTF-P mission, click here.

Map of the Philippines 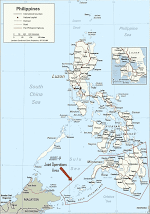